The construction of the Dubai Metro Red Line started in 2005, and its inauguration was held in 2009, but it was not fully completed at that time. The cost of this project (including Green Line) is around 7.6 Billion US Dollars, and the average price per kilometer of this line is about 102.2 Million US dollars. The construction was declared complete by the mid of 2010. It consisted of a total of 29 stations, which were opened gradually in phases from 2009 to 2011. Dubai Metro Red Line route starts from Rashidiya in the east of Dubai and ends at the Jebel Ali in the west. It accompanies Sheikh Zayed Road for most of its journey. It has a total length of 52.1 km, and it holds the record for the single longest driverless Metro Line in the world. The record was awarded by Guinness World Records in 2011. There are two transfer stations, where Red Line intersects with the Green Line, i.e., Union and BurJuman station. At these transfer stations, passengers are allowed to witch lines if they want to. 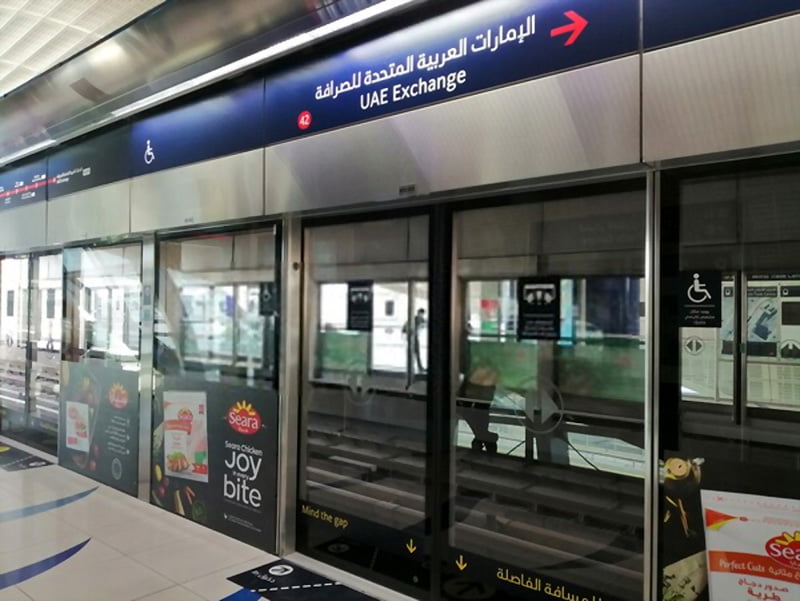 The Dubai Metro Red Line has 29 stations in total, 24 of them are elevated, four are underground, and only one station is at ground level. The average speed on this Line is about 47 km per hour, and the total trip time is estimated to be of 70 minutes. The trains on this line accelerate at a maximum speed of 110 km per hour. Each train has a 20 to 30 second stop at every station. Out of the total of 52.1 km, more than 4 km of the line is underground. It takes an average of 60 to 90 seconds to travel between the stations. The Road and Transportation Authority (RTA) operates about 27 trains in off-hours and 29 in peak hours on this track. There are no Dubai metro red line timings. The interval between the trains is about 7 to 8 minutes in off-hours and 5 to 6 minutes in peak hours. As per the latest statistics, Red Line had 35 trains in 2019, and 15 new were to be added by the end of 2019.

As an extension to the Dubai Metro Red Line, a site was announced at the end of 2015, and the project got completed by mid-2019. This project was named “Route 2020” and will be inaugurated at the start of 2020. This project will extend the Red Line from Nakheel Harbor to Expo 2020 and is 14.2 km long. Seven new stations will be added, five of them are elevated, and two are underground.  The Road and Transportation Authority (RTA) has also generated revenue of over 2 Billion Dirhams by getting sponsors for the stations from the nearby business.  According to the Road and Transportation Authority (RTA), each station has bought in about 90 to 100 million dirhams as revenue. A second extension to the Red Line is also proposed from Rashidiya to Mirdif.