Dubai Metro Map shows a schematic of Metro that plays an important role in the city. Dubai is a territory of the UAE. It has a population of roughly 3 million people. Geographically it is situated halfway between Asia and Europe. Dubai is landlocked from 3 sides by the Arabian Desert. It covers an area of about 4,114 km2. In the past few decades, Dubai has skyrocketed in the economy. Dubai is now the tourism capital of the UAE. Currently, Dubai holds the world’s best architectural structures like Burj Al Arab, Burj Khalifa, etc., these masterpieces attract millions of people from around the world for tourism. The enormous number of tourists also brings a heavy burden on Dubai’s local transport infrastructure. Due to this heavy burden, Dubai felt the need for an express transport system that can travel from one end of the city to the other.

The metro plan Dubai was the answer to this problem. Road and Transportation Authority (RTA) Dubai took the responsibility and started the construction in 2006. It lasted for about three years, and in 2009 the Dubai Metro was ready to serve. It had only nine stations working out of a total of 28 Red Line stations. The cost of this project was about 4.2 billion USD, according to the Road and Transportation Authority (RTA) Dubai.

This system has eased many of the people in Dubai for daily travel. As the city is known for its extravagant lifestyle, the Metro was a pure impression of their luxurious way of life. Road and Transportation Authority (RTA) produced one of the most modern, comfortable, and reliable Metro systems that the world has ever seen. The trained are air-conditioned, and they have a separate section for women/children and men. This Metro not only connected Dubai from end to end but also linked it to the neighboring emirates as well. 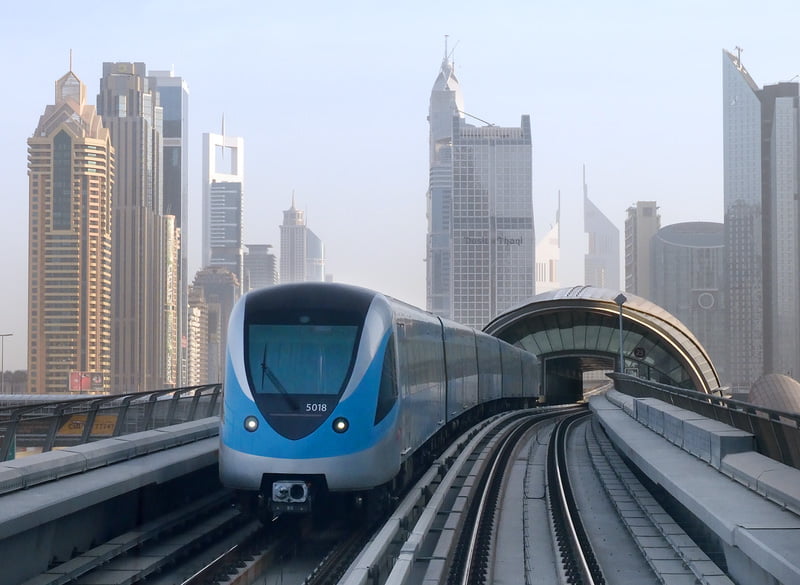 The next phase of Metro Plan Dubai was to build up the remaining 18 Red Line Stations along with the new Green Line. The Green Line connected Etisalat to Creek with 18 operating stations. The construction began in February 2010, and it finally came to an end in 2011. This whole project cost Road and Transportation Authority (RTA) an extra 2-3 Billion Dollars. The Metro was again opened in March 2011 with the enrollment of ten new trains. At that time, Dubai Metro had 22 working trains to serve both Red Line and Green Line.

The architecture of the Metro was designed by an international architectural company Aedas. This firm was formed in 2002 with the alliance of three different companies from all over the world. Automatic Train Operation is used to automate all of the trains in Dubai Metro; this makes all the trains driverless. The trains are fully air-conditioned as well as the stations. The Dubai metro stations map also has platform edge doors, and trains have a window panel that offers a great view of the city during the ride. Dubai Metro held the record of the world’s longest driverless metro, with a total route length of about 75 kilometers, up until 2016. However, Red Line is still the world’s longest single line driverless metro with a route length of about 52.1 km.

Dubai Metro has two working Lines and one under construction line right now. Below is the detail of all the Lines.

Two lines have been constructed. Another is scheduled to open in 2021.

Dubai Metro Red Line starts from Rashidiya and goes all the way up to UAE Exchange. The total length of this line is about 52.1 kilometers, and 5 kilometers of those are underground lines. The construction of the Red Line started in 2005, and it was completed by the end of 2009. The cost of this project (including Green Line) is around 7.6 Billion US Dollars, and it had 29 stations. This means the average cost per kilometer of this line is about 102.2 Million US dollars. The average speed on this Line is about 47 km per hour, and the total trip time is estimated to be of 70 minutes.

Dubai Metro Green Line connects Etisalat with Creek, and it has a total of 20 working stations. The total length of this line is measured to be 22.5 kilometers, 8 kilometers of which is underground. The construction of this line started in 2006, but due to some global crisis, it didn’t finish on the proposed completion date. The proposed completion date was March 2010, but this line was officially opened in September 2011 due to the delays. As mentioned above, this line was constructed alongside the Red Line, and the total cost was about 7.6 Billion US Dollars or 28 Billion AED. The cost/km was roughly around 102.2 Million/km. It has a trip time of 40 minutes, and the average acceleration is about 38 km per hour.

This line is supposed to connect Nakheel Harbour and Tower to Expo 2020 and is yet under construction. The construction started back in 2017, and the proposed completion date was the end of 2018. However, it is not active, but according to the Road and Transportation Authority (RTA), it will get operational by May 2020. The total length of this line is about 14.5 km, with seven working stations. The estimated cost of this project is about 2.45 Billion US Dollars, and the cost per kilometer is calculated to be approximately 186 Million US Dollars per kilometer. The trip time and the average speed is unknown as the line is not operational yet.

A British public service provider group named Serco is operating the Dubai Metro under the contract to Road and Transportation Authority (RTA) Dubai. According to the statistics of 2018, the Metro Line Dubai carries about 204 million passengers annually (132 m on Red Line and 72 m on Green Line). According to the Road and Transportation Authority (RTA), the total ridership has surpassed 1 billion total trips since 2009.

The Dubai Metro is the world’s safest Metro. It has a dedicated Metro police that is always available in case of emergency. There are over 3000 CCTV cameras installed all over the Dubai metro station and trains to avoid any misplacement in the carriage or for other security reasons. These CCTV cameras are always monitored live by the metro police. There is an inbuilt radio communication system between the Metro train and the emergency forces / Metro police. In case of any medical emergency, there is an Emergency Call Box in each train that is directly connected to both Metro Police and Ambulance Services.

There is also a definite layout of the train. Dubai train map is as follows

The Gold Class Cabin has some extra features and hence is a bit more expensive. It has leather seats with decent legroom, and there is a separate seat for each passenger. It has carpeted floors with special lighting and designs. The Gold Class Cabin also provides a panoramic view of the track from the front, and it also has a separate boarding door. It also has a luggage apartment where you can place your luggage if you want to. The seats also have a tray table in front just in case you need one. If you are traveling with your fellows, Some seats are arranged in a club-style manner. This section also has a separate high internet connection.

The Standard Cabin does not have that many features, but it is still very comfortable. Man cannot enter the Women and child section. Traveling in the wrong section can fine up to 50$. The train in total has a seating capacity of 400 passengers and is 75 m long. These trains have a maximum acceleration of about 90 km per hour.

Aedas has used a unique architecture for every station. All the stations are based on five different themes. These themes symbolize different things as mentioned below

This theme is there to express the culture and history of the United Arab Emirates. Heritage Theme has no color effects, but it has many other things attached to it. The spirit of the structure idea revolves around utilizing the engineering routine components used in the old structures of the UAE. They have wind towers, oriels, alleyways, internal arches, and other elements. This duplication is an upgraded way. The legacy-inspired stations look like healthy development of the ordinary souqs in the area. Heritage-themed stations are very few as compared to the other ones.

The Earth Theme marks the beginning of Dubai’s drive towards the urban lifestyle. This also resembles the durability of earth and soil. This theme has a tan-brown color effect to it.

This theme symbolizes the pleasure and delight that Dubai gives to inhabitants and visitors. The color effect in this theme is green.

Fire Theme signifies the vitality, strength, and solid will-power shown by the pioneer of Dubai. It has an orange and red color effect.

This theme symbolizes the moral values that Dubai ensures in its modern accomplishments. Water Theme has a blue-white color theme.

There are many other facilities that Dubai Metro provides for its users. Kindly find the below list.

Dubai Metro has built three multi-level parking areas at three main stations that can accommodate more than 8000 vehicles. These parking areas are free for the metro users, and passengers can park their cars in the parking area to ride the metro to work or any other desired location. Two out of these three parking areas belong to the Red Line, and one belongs to the Green Line. The parking capacity is as follows

Disabled people are very much regarded in the UAE. The attitude towards ‘People of determination’ is nice. They can travel for free by just getting their Nol card. There are also elevators and tactile guidance paths for disabled people.

Some other facilities are also there

The Dubai Metro has fixed fares based on the Tier system. It has three tiers.

The fares of each tier may vary with time. The disabled have no fares, and there is a special discount for seniors as well as students.

There are three types of Dubai Metro Map for the route.

This is the simplified Dubai Metro Map that shows only the station on the path of all three Lines. This map also has the transport zones mentioned on it, which is useful for users to calculate the fare. 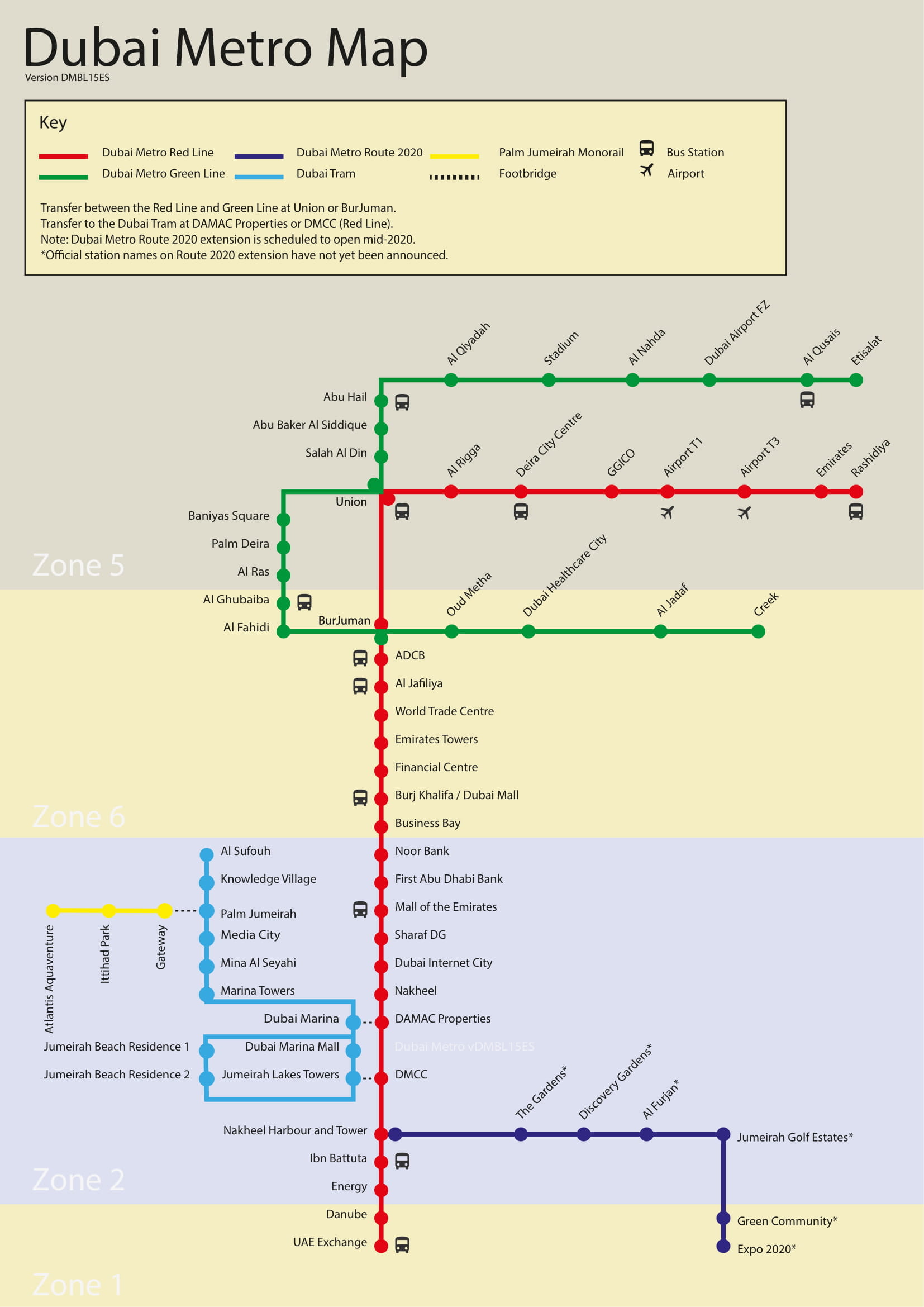 This Dubai Metro Map shows the actual locations of all the stations. There are labels of places around the station. The interactive map also has the transport zone detail on it.

In this Dubai Metro Map, all the three Lines are shown on the actual map of Dubai. 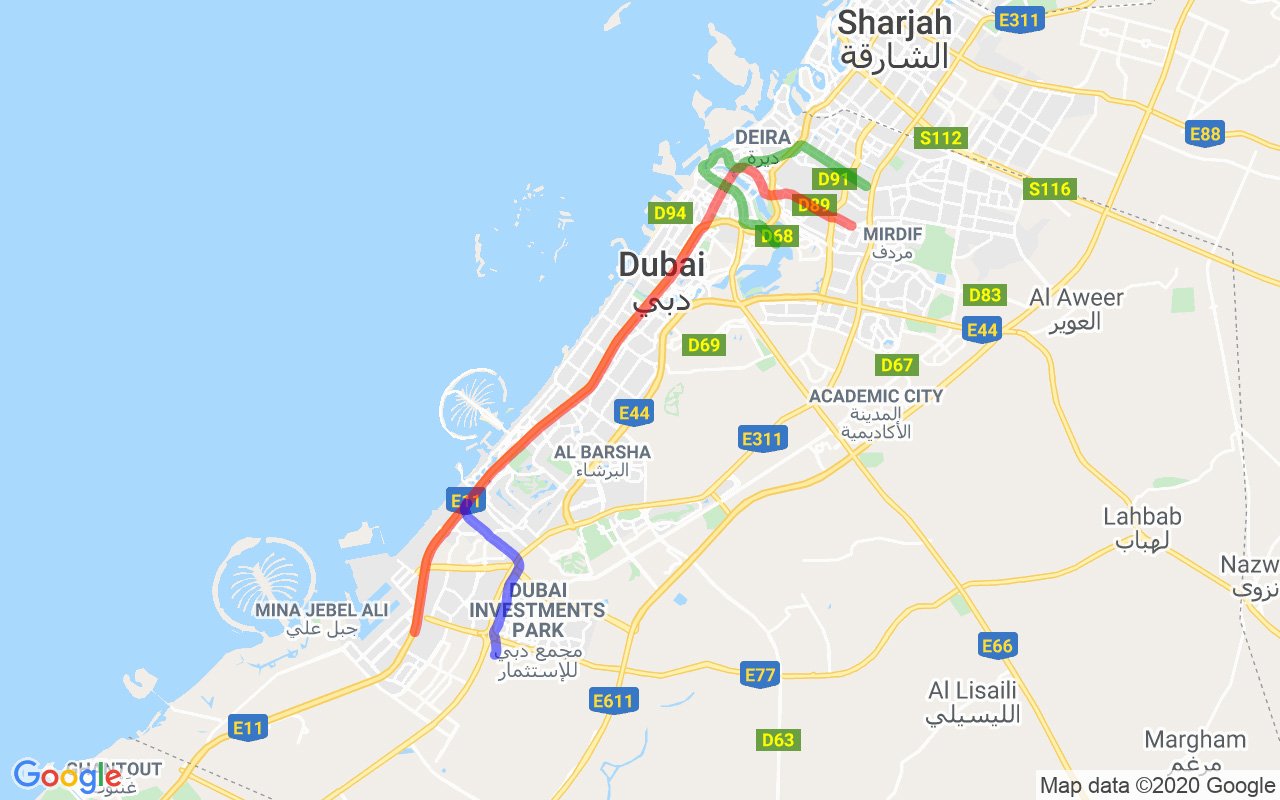