Dubai Metro Green Line has a length of 22.5 km, with 7.9 km under the ground. The construction of this line started in 2006, but due to some global crisis, it didn’t finish on the proposed completion date. The proposed completion date of the Dubai Metro Green Line was March 2010, but this line was officially opened in September 2011 due to the delays. Twenty-five driverless trains are currently operational on the Green Line. These trains can accelerate maximum up to 110 km per hour, and they stop at each station for about 20 to 30 seconds. The total cost of the whole project, including Red Line, was about 7.6 Billion US Dollars or 28 Billion AED. The cost per km was roughly around 102.2 Million. At the time of inauguration, the Green Line operated for only 17.6 km, but gradually the rest of the line was also opened. The average speed of trains on the Green Line is about 38 km per hour, and the total trip time is estimated to be around 40 minutes with all station stops included.

There are two transfer stations on the Green Line, one is at the Union Station, and the other is at the BurJuman Station. Passengers are allowed to change the ride from Green Line to Red Line at these two stations. These two stations have the capability of handling 22,000 passengers per hour. The parking facility is also available at the Etisalat Metro Station, which is free for anybody using the metro. This parking area has space for around 2300 vehicles. The biggest elevated station on this route is the Al Qiyadah Station. This station is located near Dubai Police General Head Quarters and has a capacity of 11,000 passengers per hour in each direction.

There are no specific Dubai Metro Green Line timings; the train runs every 4 minutes during peak hours and every 7 minutes during the regular hours. According to Gulfnews, the extension plan of the Green Line has been approved, and the line will be extended to Academic City. However, the official announcement about this extension, from the Road and Transportation Authority (RTA), is yet to be made. 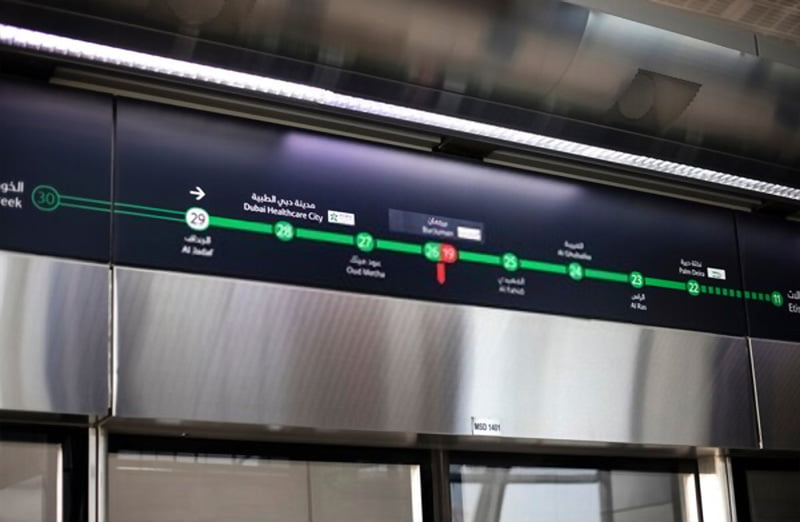 The Etisalat station has the maintenance depot for the trains along with the parking facility for the passengers. The Etisalat and Creek both have bus and taxi stations nearby. There is a 20 to 30 second stop on every station.